Back to golf – Round 1 scorecard 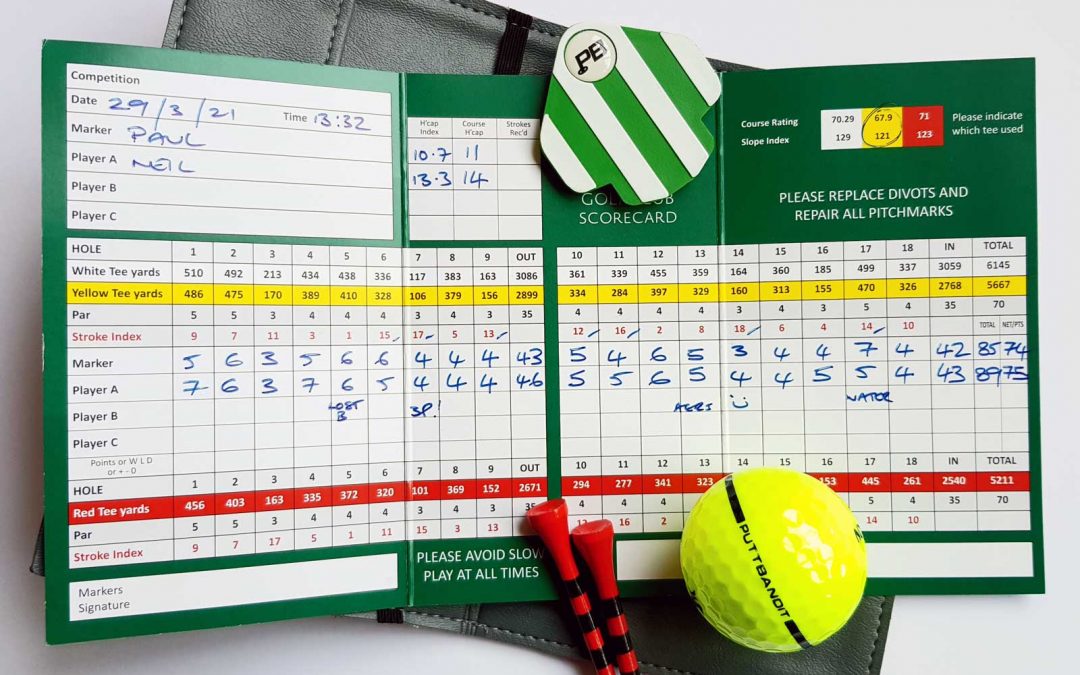 After a 3-month lockdown break, it was great to be playing golf. The sun was out, it was warm and breezy with winds gusting above 30mph – so bright but a little challenging. The course was predictably packed with jabbed-up escapees and the pace was on the four-ball, no hurry, leisurely side, but it didn’t matter. My brother, Neil and I, were back playing golf again. Fantastic?

Be careful what you promise

I really wasn’t expecting much of my performance. Breaking 90 would be OK. In fact breaking 100 wouldn’t be the end of the world either. Just a few great shots and a few pars would gloss over any 3-figure outing. However, back in my blog of March 12th, when I booked this round, I had promised to publish my first card since lockdown. So the pressure was on. Overall I’d say it was a respectable first outing for both of us. No huge disasters or flashes of brilliance either way. Just a bumpy, rusty round of golf. But it was actually playing real golf and that made the whole day.

Now for a few unbiased situational observations – completely different from excuses – just the facts. We weren’t golf-fit. An understatement. And it was windy – even the birds were walking. And because it was busy and we were behind a slow four-ball, we did go for lay-ups a few times instead of going for it, just so we could keep on playing rather than standing around waiting for the green to clear. To our rear we were under pressure from  a two-ball who were all business and not hanging about. No one was behind them for two holes. At one point I was tempted to let them through, but at the turn, our chasing duo called it a day. We then created a forward buffer zone with a few putting competitions on a tricky green where the break looked one way but went the other. We had made our own golfing bubble with at least a hole’s social distance to front and back. Perfect.

The main overriding issue was inconsistency in shape, direction and distance for most shots off the green, but that was fully expected. We had some decent holes but some not-so-good ones too. That’s golf. My putting was just OK. Direction was as planned but my speed judgement was way out of calibration after 3 months of hallway carpet. Overall, it didn’t really matter. It was a beautiful spring day and we were playing golf for the first time in months. And as a bonus, there were a few comedy holes that summed up some of the rusty errors I made.

On the 5th I lost a ball after a bit of a faded drive turned slicey as the wind got hold of it. The ball landed in a flat marshy patch by a pond and must have been well plugged as it was nowhere to be seen on the line I was tracking. Conscious of the chasing ladies I dropped a new ball and took my medicine.

Following my blog of last week – “Don’t miss the short ones” and the avoidance of 3 putts – I managed to 3 putt on the 7th hole. Typical. I wedged the ball onto the green, way short and down a ridge leaving a 30-foot uphill right- and left-breaking putt. The first putt was 6 feet short and the second was 3 inches short. ‘Don’t miss the short ones,’ eh? Beware what you write about. The shame of it.

On the par 4 dogleg 13th, I hit a great 4 iron over the trees to the centre of the fairway and then decided to practice for a ploughing competition, managing to wedge the ball a little further than my agricultural sized divot. I did that twice in a row. And so with two dreadful practice pitches, my third went 50 yards to rest 2 feet from the hole escaping with a bogey.

How to reduce the influence of strong winds

The 14th was comical. A 160-yard par 3. The wind was blowing hard off the right and my usual miss was to the left of the green. So with my big miss in mind, I aimed it quite a bit right. Good plan. But instead I then thinned a 7 iron, dead straight, 3 feet off the ground to rest 10 feet from the pin. Clearly, in my mind I was trying to stay under the wind but maybe not by that much. I told Neil I’d planned it that way. I’m sure his laughter was agreement. Anyway, it’s the end result that matters.

I must admit that towards the end of the back 9, I was feeling tired. Legs, back, bones and muscles were complaining – “Are we nearly there yet?” It’s clear that a few walks, practice swings in the garden and hallway putting are no substitute for the real thing.  And the real thing was brilliant. It’s so good to be playing again.

How did your return to golf go? Email your story to contribute@puttbandit.com and we’ll mention some of the best reports in our monthly newsletter.

Paul Hart is a founding director of PuttBANDIT Ltd, co-inventor of the PuttBANDIT Ball Marker and enthusiastic improver. Paul currently has a handicap index of 10.7 but sure to rise soon.