One down, one to go for Team Europe 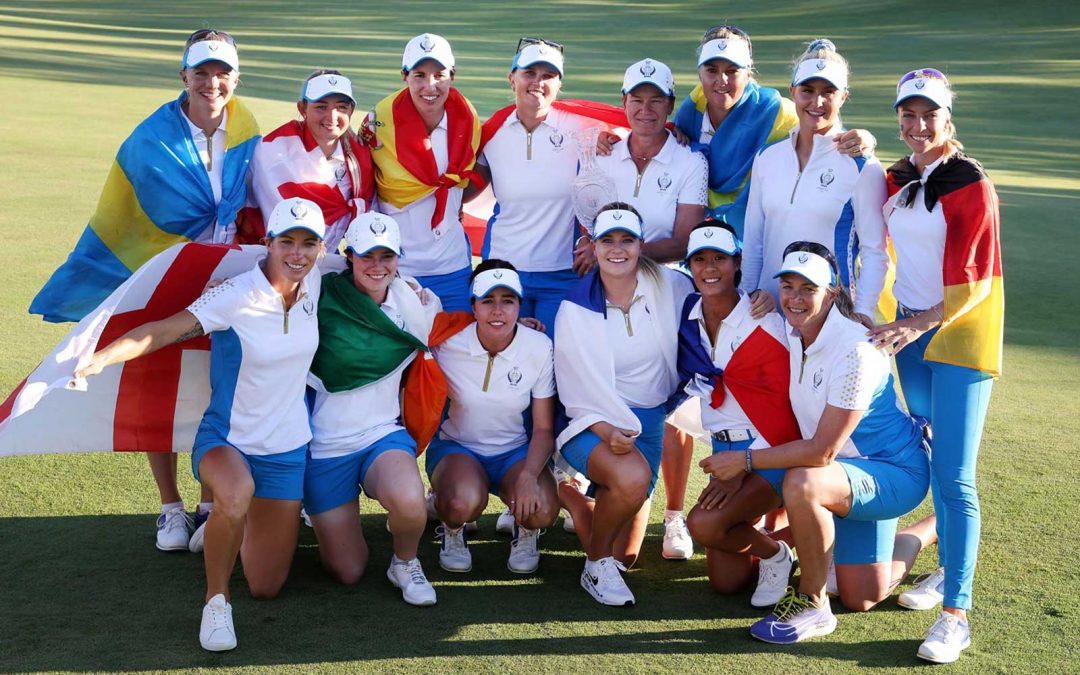 This September’s epic spectacle of Europe vs USA in both Women’s and Men’s golf is well under way. On Monday 6th September, Team Europe won and retained the Solheim Cup, 15-13, in a brilliant exhibition of some of the best golf you will see anywhere, by any team. The Ryder Cup is up next and you can bet those Team USA men are going to want to get some pay-back.

History – no guide to the future

On paper, Catriona Matthew’s Team Europe didn’t stand a chance. Team USA’s average world ranking was 26.2 vs 44.1 for Europe. Team USA’s huge total of 2,384 Rolex points dwarfed Europe’s by an extra 41%. And it gets worse when you look at Race to CME Globe points with Team USA scoring 59% more points in total than Europe. Team USA may well have been thinking “Polish that cup and hand it over”  And then you read the small print on the form book.

While the ranking points indicate overall performance, being able to win is something else entirely. We’ve all seen tournament leaders just collapse under the huge pressure in the final few holes. Winning is hard – not that I would know. Since 2020, European team players had chalked up 11 wins and 2 majors to their credit, with Team USA earning 10 wins and 1 major. But more telling for me was the depth of winning experience. Europe had 7 winning players on their team, USA just 5.  So there were reasons to be cheerful for Team Europe and a lot of team spirit to back it up. At the end of the day, it was a team game – and didn’t they do well?

While the quality of the chipping was excellent at the AIG Women’s Open, it was the excellence of pretty much every aspect of their games that impressed me from every player at the Inverness Club in Ohio. Accurate drives, amazingly close approach irons, some phenomenal putting – all under extreme pressure, and some amazing golf by the rookies.

Get in the bunker!

The crowd, predominantly American due to USA’s very tight COVID entry restrictions, amounted to an extra player or two for Team USA. While I didn’t hear many “mashed potatoes”, there were plenty of “Get in the holes”, and a few uncharitable “Get in the bunker” when it was Team Europe’s turn to putt, but par for the course at an away match. And then it all got a bit awkward.

Controversy? I’m not so sure

During the Day 1 four-ball matches, Nelly Korda narrowly missed a putt on the 13th. The ball was very close to the lip but not moving. Madelene Sagström steps in, picks up the ball and tosses it over to Korda with a smile in polite concession of the tap-in. However, words were spoken to the ref, who then informed Team Europe about their transgression of the 10 second waiting time rule and Team USA were awarded the hole as if the ball had dropped – which it didn’t look like doing. 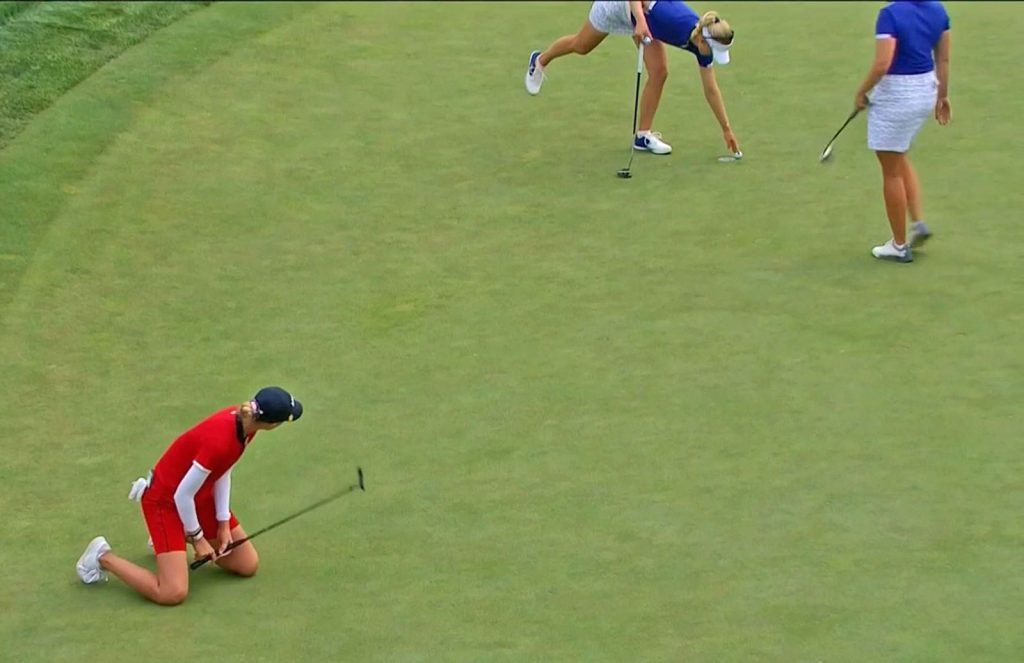 My view, and probably Sagström’s, is that the putt was missed and the ball wasn’t going to drop anytime soon barring an earthquake. However, Madelene did pick up the ball within the 10 seconds afforded for the ball to make up its mind. After that kerfuffle, the air chilled considerably. Sagström was very upset and Korda and Ewing went on to win the match 1 UP. After that, I didn’t witness any Team Europe player go anywhere near a Team USA ball on any green for the next 2 days. Team orders? I don’t blame them. I found a clip from Sky Sports Golf on YouTube which encapsulates it well. Judge for yourself.

While every member on both sides gave everything they had to win, showing outstanding skill, Leona Maguire who was consistently outstanding for Europe and Jennifer Kupcho was, at times, just unbelievably good for Team USA. These were relatively new names to me, having not seen them play before, but they were both brilliant, Maguire a little more so when she beat Kupcho 5 and 4 in the final day singles.

Warm up the telly

If you want to practice your best Ryder Cup shouting at the TV ahead of the Friday 24th September, please do watch the Solheim Cup daily highlights. The BBC have nicely boiled the action down to an hour for each of the three days so give BBC iPlayer a few clicks. Other platforms are available.

Can’t wait for the Ryder Cup. Until then, putt well.

Who impressed you at the Solheim Cup? Let us know in an email to contribute@puttbandit.com 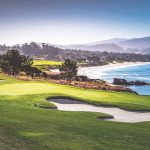